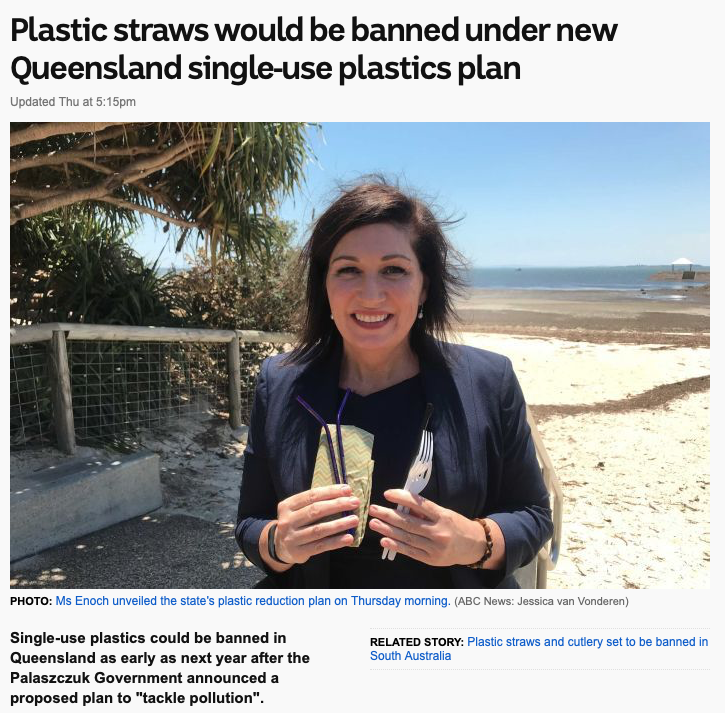 Today ABC Brisbane interviewed our Managing Director Mick Krause for his take on the government’s new proposal to ban all single use plastics. You can read the full article here and don’t forget to let us know what you think.

“Single-use plastics could be banned in Queensland as early as next year after the Palaszczuk Government announced a proposed plan to “tackle pollution”.

The new plan would see plastic straws, cutlery and plates scrapped under new legislation to be introduced next year.  The State Government would also consider extending the ban “down the track” to include coffee cups, plastic cups and heavyweight shopping bags.  Whether it is retailers or suppliers, some businesses are already making the transformation.

“We’ve never seen the change happen and transition so quickly in a very short space of time,” he said.  “It’s all market driven.” 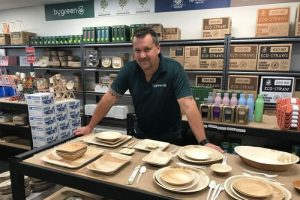 Mr Krause now imports eco-friendlier products made from paper, bamboo, palm leaf or corn starch.  But he said infrastructure — to complete the waste cycle — is lacking.  For example, straws made from corn starch need to be industrially composted through heating.

“Unfortunately there’s only about 10 locations in Australia at the moment that can actually process those type of straws,” he said.  “Whether we blame the Government or not, the infrastructure is just not there at the moment.”

The Queensland Government said its plan would also look at finding new ways for plastic to be recovered, reused and recycled.

National Retail Association chief executive Dominique Lamb said business welcomed the move, which she said consumers have been calling for “for some time”.  “But obviously from an industry-wide perspective, consultation is going to be the key, because you can’t just simply pull those products, as we know, from stores because it causes a lot of consumer angst.”

Deputy Opposition Leader Tim Mander said the LNP backed “action to cut down on plastics and grass roots environmentalism” but wanted to see the details of the proposal.  “The LNP led the way in calling for the plastic bags ban and the container deposit scheme, which the government then followed,” Mr Mander said.

Toby Hutcheon, from recycling advocacy group Boomerang Alliance Queensland, said the ban would cover takeaway items that are second only to cigarette butts as a source of litter.  “The most recent Clean Up Australia rubbish report reported that those items represented 36 per cent of all litter in Queensland,” he said.  “So acting to ban these is a great move forward in terms of reducing both litter and reducing waste.”

Mr Hutcheon said a voluntary ban among Noosa businesses in the last 18 months alone had “removed over 3 million plastic items from use [including] over a million plastic straws, 750,000 containers and 250,000 coffee cups”.

Shane Cucow from the Australian Marine Conservation Society said the proposed ban was “especially good news for Queensland’s beautiful beaches and seas”.  “To save turtles and seabirds from choking on the plastic flowing into our oceans, we must stop it at the source,” he said.

WWF’s Katinka Day said Queensland’s move sent a message to other states ahead of a national meeting of environment ministers on Friday.

“Victoria is the only state to not have a container deposit scheme and New South Wales is the only state not to have a ban on single-use plastic bags.  “So we’re really hoping that Queensland’s move today puts pressure on the rest of Australia to take action on plastics.”